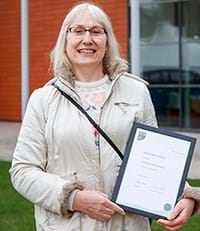 Computer Scientist Sophie Wilson, who helped design the BBC Micro and ARM architecture, has been awarded a Distinguished Fellowship by BCS, in recognition of her pioneering work.

She says team spirit has always been important to her: “I’ve been very lucky to have a chance to be in companies that have a non-ego driven team spirit. BBC Basic, all the Basic interpreters in BBC Acorn, ARM, and all the ADSL central office success, and beyond - it’s all been about teams.”

The BCS award is reserved for those who have profoundly changed the way society benefits from information technology. Previous recipients include Tim Berners Lee, Bill Gates, Vint Cerf, and Grace Hopper.

Sophie Wilson began building microprocessors when fifteen years old. During her pre-university gap year, she designed and built systems; in her first vacation she developed a cow-feeder which released personalised amounts read from electronic tags; and immediately after graduating she launched the first of her personal computer and microprocessor designs. She designed the Acorn System 1, she coded the operating system in binary before designing and implementing Acorn Assembler, Acorn BASIC and Atom BASIC (which eventually led to BBC BASIC).

She and Steve Furber took less than a week to design and implement the prototype of the BBC Microcomputer, Acorn thereby clinching the contract for the world-leading Computer Literacy Project. They refined it, with Sophie designing the operating system and writing the BBC BASIC interpreter and over the next fifteen years she designed and implemented BBC BASIC versions 1 to 6 for a succession of chips. The ensuing decade saw over a million BBC micros sold and used in thousands of UK schools.

Ms Wilson says there was one thing behind the success of these projects and that is team-spirit: “We’re all part of British culture, you don’t sing your own praises. We’re all keenly aware, the graduates of Acorn and ARM, that our success came from working as a team.

“Steve Furber and I often end up accepting awards or things together because that was our career, we did stuff together.”

She single-handedly designed and implemented the ARM second processor operating system; and co-designed the ARM3, ARM610 and ARM 700 processors and the ARM7500FE single chip computer. By 1999, Sophie Wilson had developed the basis of a SIMD LIW processor which became known as Firepath. To exploit this in the emerging ADSL wired broadband market, she and six others successfully launched Element 14 as an Acorn management buy-out.

Sophie led the design of the instruction set for Firepath. Within two years, Broadcom bought Element 14 and went on to win 75% of the world’s Central Office digital subscriber exchange business. Sophie is now a Research Fellow and Distinguished Engineer at Broadcom and continues to develop the Firepath processor.

Sophie’s advice to young aspiring computer scientists is straight-forward: “I haven’t had to do a job interview in my life - I got the job at Acorn by demonstrating that I could do things. My basic message is - become passionate about something, practice it and do it well.”