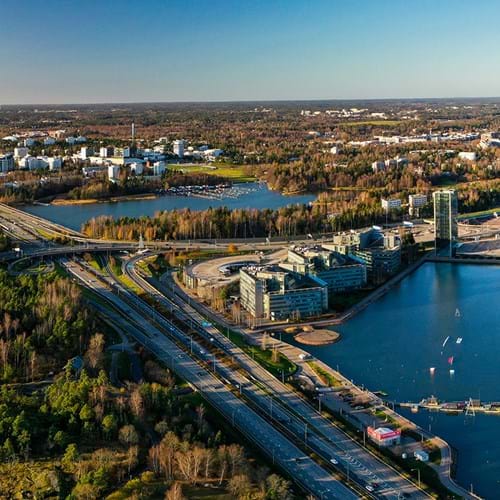 In 2020, a European Commission initiative was launched to make cities more intelligent, socially responsible and to grow in a more sustainable way, through the use of smart technology. Here, Espoo, part of the Greater Helsinki Municipal region in Finland, shares its smart story with Johanna Hamilton AMBCS.

The Intelligent Cities Challenge is a European Commission initiative that seeks to mentor, advise and support cities as they move into a cleaner, greener, more carbon neutral future. In the shadow of COVID, the programme is designed to be a catalyst for recovery, in order to support local economies, create jobs and foster a greater sense of citizenship and wellbeing. Harnessing tech to support change, provide knowledge and provide evidence of need, the initiative seeks to shape the digital future of each city, supporting reskilling and sustainable investments where they are needed most.

The initiative, part of the EU Green Deal, provides support, training materials and online resources to support cities in their digital transformation strategy. In the case of Espoo, the region is famous as home to the once stellar Nokia brand. Though no longer the number one mobile phone manufacturer, Nokia has transformed and now works in collaboration with local and national authorities, as well as education providers, to support the cities digital transformation into a sustainable, tech-driven community. The area is home to a variety of start up companies and is home to the Aalto University of Technology and the Technical Research Centre of Finland. It was also a finalist in the 2020 European Capital for Innovation competition.

As a Mentor City in the Intelligent Cities Challenge, Espoo has been working with the Digital Agenda Programme to promote and develop new ways of delivering the city’s services. Since Launch, the city has received over 150 proposals. Its committee then organised three different rounds - gathering ideas and proposal campaigns in 2015 (43 proposals); in 2017 (51 proposals) and in 2019 (59 proposals).

After careful consideration, 20 experimental projects were chosen to take forward between 2015-2021. The ideas were harnessed through a combination of co-creation, innovation and collaboration with city personnel, residents, customers, associations, research institutions and organisations. Over 6,000 residents, 400 Espoo city employees and over 70 collaborators (including companies, NGOs, research and education organisations) participated in the programme.

Like many European countries, the population of Espoo is growing, getting older and immigration is changing the composition and language groups in the area. It is estimated that by 2035, around 30% of Espoo residents won’t have Finnish as their first language. There are also challenges around funding and pressure on delivering services the city needs and will need in the future.

In order to maintain services, over 90% of Espoo residents are willing to utilise digital services, such as mobile applications, to make their lives easier. In the 21st century, residents of the municipality expect to access services 24/7 in a choice of languages. The challenge has been to maintain and improve services, improve cost delivery and to make the process sustainable.

Through the Digital Agenda, the city has worked to experiment with ideas and implement solutions that work for residents, customers and stakeholders. The new solutions had to take into account human aspects and the physical environment, as well as utilisation of data, systems, applications and different technologies. There had to be room to develop, in a sustainable way, but there also had to be an awareness of cost, impact and the value exchange in seeking out a more sustainable net zero future.

As immigration brings new challenges, so Espoo has embraced its digital legacy to improve the lives of its residents from age two! The initiative identified that day nurseries already had the infrastructure to teach through large screen monitors - but that the nurseries didn’t have content to share with the children. As increasing numbers of children do not speak Finnish, the programme developed an animated game specifically for children aged under five, that was essentially ‘language free’. This has enabled children to interact with their peers, to play and learn together - and it has also helped to better utilise the nursery equipment.

Teachers of school age children have been using augmented reality (AR/VR) and 3D related applications within their teaching tool kit. Such visualisation tools have been essential for sharing the vision of architects and city planners on how to change urban city centres, metro stations and, indeed, the schools themselves. Input from all citizens, especially those who will one day lead the city, is especially important.

And in the utilisation of digital, the Espoo council has experimented with using chatbots and AI in its customer services, using a mobile application that offers interpretation and translation services in voice and text - in real time. Machine learning has enabled the council to translate English, Russian and Arabic into Finnish and vice versa, at the point of contact. The initiative was used on both computers and mobile devices initially as a way to interpret at face-to-face encounters. Although the city has not yet rolled out the application for remote customer service purposes, it realised how valuable it would be to integrate the translation and interpretation application to existing tools used its employees, (such as online meeting software).

The Intelligent Cities Challenge has given Espoo the tools and experimental time needed to ascertain the value of digital to customers, as well as implement the translation and interpretation applications. Employees are now using the tools, not just for customer service, but also to understand multi-lingual meetings for a variety of stakeholders.

A shining light, showing the way ahead

As part of their drive to City as a Service status, they wanted to both promote and experiment with new ideas that would develop sustainable services for the benefit of all stakeholders - including residents, employees, partners and collaborators - and be a model of what could be achieved for other cities to follow.

Espoo is one of 136 intelligent cities that have taken advantage of the European Green Deal to transform to become greener and socially more responsible intelligent hubs. As the visible short term results and especially the long term benefits are published - and Espoo's reputation grows as a pioneer city and community that promotes an experimental culture - so other cities are taking notice of the Digital Agenda.

The programme and its learnings

When the Espoo team was asked to share their top learnings from the initiative, they said the programme has:

In the coming years, the Espoo team will extend its existing operating model and experimental methods to capitalise on the creation of the Espoo ecosystem, e.g., utilising Espoo's rich ideas portfolio, the MakeWithEspoo co-development platform and to foster testbeds for even greater agility.

As solutions are created, tested and implemented, the cities share their solutions through the ICC Tech4Good Marketplace. Within the digital library, cities can select the area they need help with, then pick the resource pack to start work on everything, from green house building, to LoRaWAN Architecture; smart water metering, to smart parking meters; smart waste and recycling, to cycle path infrastructure. Almost every aspect of making better decisions for a more sustainable future is available at the click of a button. Currently 51 cities in 24 countries have shared 61 solutions.

Using the tools, services and coaching provided by the ICC, as well as collaboration opportunities with other cities in the programme, the initiative seeks to encourage economic recovery, resilience and to support areas of improvement both socially and for business development, both nationally and internationally.

The Intelligent Cities Challenge is a continuation of the Digital Cities Challenge. The Core Cities group consists of the original group of 41 cities, plus new applications from within the EU. The Core Cities are the major beneficiaries of the Mentor Cities, who have joined the programme as hubs of innovation. Mentor Cities are experts in at least one of the ICC’s thematic areas and have been selected to share new ideas, technology and more to help implement ideas at scale in their larger partner cities.

The five thematic areas the ICC concentrates on are:

Green IT Computing in society Future tech Design and development