Is Wakanda a real place? Building smart cities within Africa 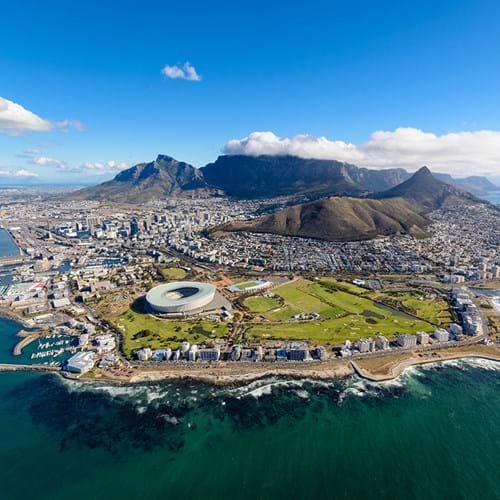 What are smart cities and how can these technologically-enabled, futuristic utopias solve some of Africa’s most complex problems – from traffic to corruption? Is a Wakanda-on-Earth a realistic possibility in Africa and, what, if anything, must change to make it happen?

In her speech at 2022's Turing Talk in London, Eneni Bambara-Abban explores these questions and more, using examples of ongoing smart city projects in the continent and data taken from her studies to illustrate the future that, for many reasons, is near – yet so far.

How has Wakanda inspired smart cities?

Amidst storms Eunice and Franklin, Eneni Bambara-Abban sets the scene by taking the audience on an imaginary journey to Wakanda – a fictional East African country that’s home to Marvel superhero, Black Panther.

What’s incredible about Wakanda, is that, although it was conceived over half a century ago by Stan Lee and Jack Kirby for the Black Panther Marvel comics, the cities of the future imagined within its universe are serving as inspiration for the real life smart cities of today.

‘Birnin Zana, located within Wakanda, is considered by some to be a smart city,’ explains Bambara-Abban. ‘Mag-lev trains, which operate by magnetic force, are seen zipping above and around the city; pedestrians walk along commerce-filled, car-free streets (except for the occasional appearance of bus-like shuttles)...

‘It has inspired grand visions about what a technologically-advanced African city could look like.’

She continues, ‘Smart city development in Africa has become an increasingly topical field and many African cities have already embarked on exciting journeys to become “smart”.’

But, despite this, little is known about smart city development in Africa.

What does ‘smart’ actually stand for?

In the context of smart cities, ‘smart’ stands for self-monitoring and reporting technology.

In 1992, IBM coined the term for solid state drives (SSD) that had technology in place to alert if there was a problem BEFORE any device failure, allowing for data to be saved before anything is lost. We can apply that ‘smart’ knowledge today to analyse how we live and move around the places we inhabit.

‘Whilst urbanisation is great for nations in terms of increase in GDP and contributions to the economy,’ says Bambara-Abban, ‘it is no secret that, as more people move to cities, the pressure placed on climate change will become even more apparent, due to drastic increase in carbon emissions.’

So, how can we effectively monitor and control the energy being consumed – and wasted?

‘A smart city,’ Bambara-Abban explains, ‘is the concept of a place where traditional networks and services are made more efficient, via the use of digital solutions for the benefit of its inhabitants and businesses – as well as to address growing urbanisation challenges.’

Put simply: a smart city is one that leverages the strategic use of enabling technologies to support key urban development and sustainability objectives.

Moving back to the inspiration of Wakanda, which has a material called vibranium as its main energy source, Bambara-Abban posits that, although we ‘haven’t been as lucky with such a resource’ on our planet, we can ‘leverage a lot of what we already have through building completely new cities, with sustainability in mind from conception – and also through retrofitting – adding technology such as sensors to pre-existing cities.’

What are the features of smart cities?

Are there any real smart cities in the world right now?

In a word: yes. Singapore, Zurich, Oslo, Taipei, Helsinki and Auckland – to name just a few. In fact, Singapore has been the top-ranking smart city for the last three years and, as Bambara-Abban says, ‘They have this down to a T and can be considered a blueprint for showing cities what they could do. They have everything: from smart mobility, drones for deliveries (which take cars off the road); they have e-governance where people can communicate directly with their government and tell them what they need.’ It’s a vision of the future, realised today.

But how about smart cities in Africa? Returning to the fictional smart city of Birnin Zana in Wakanda (which has given inspiration for what cities can aspire to become) across Africa, multiple cities are exploring the smart city concept: from Accra to Cape Town and Nairobi – hoping to turn existing megacities into the tech and data hubs of the future.

So how will this work in reality? Starting with Senegal as an example, Bambara-Abban explains how African musician and entrepreneur, Akon, announced his vision for a ‘solar-powered, Wakanda-inspired smart city on the Senegalese coastline: Akon City.

‘He first shared his concept of a futuristic, technologically advanced city in 2018 and said it will welcome members of the African diaspora.’ But, such vision does not come cheap: the project required $6 billion investment. However, things seem to be on track as Akon shared plans of being ready to start building in 2021.

Ghana is another African nation with smart city aspirations: The Wakanda City of Return Project was launched in 2019 by the African Diaspora Development Institute (ADDI), ‘to signify 400 years of the first documented Africans landing on the shores of the Americas as slaves.’ (OurAddi.org). The project aims to create multi-billon dollar Wakanda-esque smart cities, starting with the first in Cape Coast. The vision is for each region to have one such City of Return, that descendants of the formerly enslaved may come home to in Africa, to learn about their culture and their roots.

Each city will be 5G and smart mobility enabled, promising smart living for citizens with all of the latest technology in place. However, as Bambara-Abban remarks: ‘There is no new progress to report on the project at the moment.’

Although first suggested in 2007, the Lanseria project did not start to become a reality until 2021 when President Ramaphosa announced that building had commenced on what promises to be the first smart city in post-apartheid South Africa. The plan is to have infrastructure connected to the city’s airport as the central point.

Other current African smart city projects which aim to be completed by 2030 include Konza Techno City in Kenya, Kigali City in Rwanda, Modderfontein in South Africa and Eko Atlantic in Nigeria – although frustratingly, ‘we still do not see a lot of progress,’ says Bambara-Abban.

What makes the African continent best suited for smart cities?

There are many reasons why Africa is an obvious choice for considering smart city development, including the:

- But mainly, how much it stands to benefit from real time data updates, such as traffic insights.

Traffic is a major problem in places such as Lagos (in Nigeria), the second most populated area in Africa, with a population of over 15 million. Nigeria has such grim statistics as:

Many of these deaths were caused not from the initial accident, but rather the inaccessibility of nearby hospitals or difficulty in ambulances reaching the victim due to traffic.

How can turning Lagos into a smart city solve this?

During a visit to Lagos and horrified by the traffic situation, Bambara-Abban explains the solutions and ideas that came to her, including a 2016 pitch for a drone that could bypass the traffic to deliver lifesaving medical supplies.

‘Imagine you were in an accident and needed an emergency blood supply, but you couldn’t actually get to the hospital because what should be a 20 minute journey would take three hours due to the traffic,’ she explains. ‘Things like this should not be a reason for somebody losing their life.

‘Adding smart technology to the transport ecosystem can combat the negative effects of traffic and transport inadequacies in emergency situations.’

It seems obvious that her suggestion to use drones to deliver life-saving medical supplies would be welcomed by the local government in Africa – however this was not the case. ‘Unfortunately,’ she says, ‘there is the factor of corruption. Unless you can bypass that and speak to a government ready to make those technological changes, things do get a bit tricky…’ And so, she found the project getting repeatedly blocked at government level.

What needs to change to make smart cities truly feasible in Africa?

For Wakanda to become a reality and for the many smart city concepts proposed in Africa to become successful, Bambara-Abban summarises the factors which need to be addressed:

Education: lessening the digital divide through prioritising education in technology and digital skills and helping people to understand the proposed technology, is key to allowing this change.

Infrastructure: the entire current ecosystem – from transport to health in most countries will need serious re-planning for any of these projects to get off the ground.

Security & data privacy: a lot of data will need to be collected to enable a successful smart city; transparency with the use of people’s data and building trust is therefore incredibly important.

Government, policy and legal restrictions: finally, and most importantly, change must happen from the highest levels of government. State laws and federal acts need addressing, as well as the progressiveness of governments. Bambara-Abban stresses: ‘African governments need to understand how technology, connectivity and the smart city concept is a collective benefit for the country and its citizens,’ which is one reason why smart cities have been a success in the West but aren’t yet progressing as they could in Africa.

Watch Eneni Bambara-Abban’s Insight speech and the full 2022 Turing Talk here: Turing Talk 2022: A day in the life of a smart city

Eneni Bambara-Abban is a Multi Award-Winning Robotics Engineer and STEM Communicator. She founded The Techover Foundation, an international NGO that focuses on encouraging, educating and supporting individuals from underserved communities into technology. Her most recent outreach program includes teaching girls from Rural Nigeria how to build their first robot through sustainable and renewable materials, which was sponsored by accredited engineering organisation, Arduino.

She has worked in multiple technology sectors from developing algorithms for self-driving cars to data analysis and optimization for some of the biggest gaming apps in the World. She currently works as a Product Owner for an E-commerce Tech Startup based in Ghana whilst on a Scholarship Post-Graduate degree in Data Science at The University of the West of England.

Design and development Future tech Computing in society Green IT