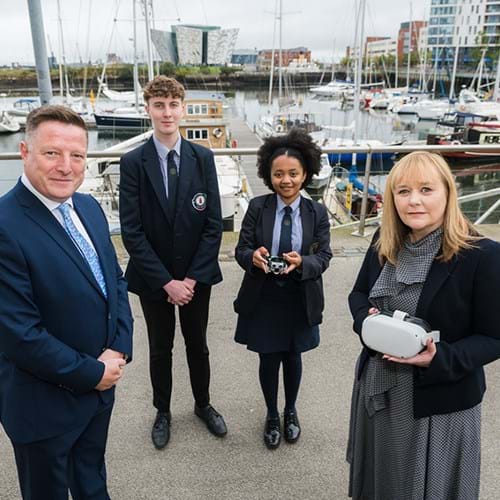 Noticing a decline in young people taking up places on computing courses in Northern Ireland, two colleagues came up with a plan to do something about it. Not to be deterred by a mere global pandemic, Rachel Steenson and Aine McCaughey called on contacts from the likes of Microsoft and IBM to help deliver a week’s worth of virtual talks and workshops, with the aim of encouraging the next generation into tech careers.

AM: I’m a software engineer but I've always had an interest in outreach and how we can encourage more young people in Northern Ireland to pursue a career in technology. We've got such a diverse technology sector in Northern Ireland but just not enough people to fill it! I believe that to do that and to encourage more people, we need to start as early as we can. To that end, I started the Coding for Kids outreach team within Civica a couple of years ago.

We started with primary school kids, doing coding workshops and going out to schools initially in the local Belfast area and we’ve since expanded that to wider Northern Ireland. Those kinds of workshops worked incredibly well. They were early intervention, getting kids interested as soon as we could - and we quickly pushed that out to post-primary level.

We also became heavily involved with Bring It On, which is an organisation run through Belfast Met here in Northern Ireland; they have a program called ‘Bring It On Ambassadors’ targeted at secondary school level. In conversations we've had with schools as Bring It On Ambassadors, the main theme was centred around people not wanting to pursue tech careers, finding that it was too difficult and that they didn't think it was accessible to them.

When COVID hit, obviously all of our outreach was sent to a grinding halt. We weren't able to get into schools, schools weren't even in session a lot of the time. And when things seemed like we were coming out of the end of the tunnel at the start of this year, a couple of us in Civica put our heads together to say, well, how could we begin outreach again? What kind of things could we do? That's really where the idea for Northern Ireland Digital Awareness Week (NIDAW) came about. We thought, let’s tackle one of these problems that has come up again and again: encouraging kids into IT.

One thing we were very keen on was that it shouldn’t be a solely Civica-led event, that it should be a more collaborative industry approach - different companies coming together to showcase the best of the talent that they have.

RS: I think I was lucky enough that I joined Civica just when Aine was looking for volunteers to get involved. It's exactly the sort of thing that I love to see happening. I had my hand up straight away to get involved.

I’d already had engagement with BCS as a Council member and Chair of the Northern Ireland Branch previously - and we've also just recently set up our BCS Northern Ireland Computing Education Committee here, to look at exactly the problems that Aine has already outlined.

Because of my volunteering at BCS, I have a great network of contacts right across the industry in Northern Ireland. What was so amazing was that every single phone call or every single email ended with people wanting to be involved, asking ‘What do you need? How do I get involved? How can we help?’ and it was just overwhelming. There wasn't a single company that said no. If we’d kept going, I think we would've had practically every IT company in Northern Ireland!

Then, we had involvement from the education side of BCS. We had Beverly Clarke (National Community Manager for the Academy of Computing) and Adam Thilthorpe (Director of External Affairs) who actually kicked off the whole week for us with one of his really inspiring talks about why IT is so important and how the students he was talking to have the opportunity to really make a difference as the world is their oyster. They can choose what type of society they want to live in and how technology can enhance and embrace that.

And we couldn’t have done it on our own! We had the support of Mark Owens our MD who is passionate about IT education in Northern Ireland, from our Marketing and PR teams who helped with all the promotion the logistics of setting up 23 virtual events and organised the launch!

What is it that’s special about the age groups you’re targeting?

AM: Not to sound cliched, but they're the future. The sector that we wish to have in 10, 15 years’ time depends on those young people. If we aren't encouraging them to think about entering the sector, we're not going to have a sector; we're not going to have a workforce. Northern Ireland at the minute is such a vibrant place in terms of the tech community that it has and the interesting companies that it attracts. If we can't continue to produce talented people and encourage talented people to go out into that workforce, we're very soon not going to have that vibrant workforce that makes the sector so amazing.

RS: We’re seeing stats like just 1% of A-level students are choosing ICT. 1%. That's awful. And the rate of undergrads in Computer Science is also going downhill. It's getting worse and worse, year on year. Yet, from what Aine and I get to see: the passion, the breadth of opportunities, the excitement and enjoyment that you get out of working in this industry - we can't understand [the decline].

Which other partners were involved in the project?

RS: We had the two universities here in Northern Ireland, Queens and Ulster, we had Belfast Met and of course Civica. We had the likes of the large companies such as Microsoft Dreamspace, Allstate and IBM, but we also had smaller companies and some homegrown start-ups, including Kinsetsu, Sustain IQ, Kairos and TapSOS. Plus, we had people that I've known over the last number of years through BCS.

What additional support did NIDAW receive?

RS: After I got involved, and really because the BCS Northern Ireland Computing Education Committee, I had a meeting with representatives of the Department for the Economy and Department of Education here in Northern Ireland to talk about the skills shortage and how BCS could help. I mentioned that Civica would be running a digital awareness week and how we’d would love to get those organisations involved. We ended up getting the funding to buy around 40 micro:bits for every single school that got involved - which ended up being 46 schools in total.

How was the launch with Education Minister Michelle McIlveen MLA ?

RS: The event took place from 18-22 October 2021. Even though it was a virtual event, we really wanted to do a live launch and the Minister was more than happy to get involved. We were able to do it at the newly refurbished W5, which has a big technology theme running through the entire building, so it was great to be able to do it there. And then Aine was able to get some school staff and pupils along...

AM: Yes, we reached out to a school which has been excellent to work with in the past, St. Patrick's College in Dungannon. We invited their Principal, Catherine McHugh, along with two Year 14 pupils to be the school representatives of the launch. That was fantastic, because we had two incredibly bright and interested pupils there, who I could picture entering the sector in years to come.

As well as that, another colleague from Civica, Senior Software Engineer Laura Soutar, and I, did a demo using Google Ventures as well as the micro:bits the Departments were funding. It went very well and gave a quick insight, not only into how projects and development projects can work in real life, but it also gave the Education Minister a chance to see the micro:bits in action and how they work.

Tell us about the week itself. You had an incredible variety of speakers, what were some of the other highlights?

AM: Maybe I'm slightly biased, but my highlight honestly was the Women in Tech panel. I was on it and felt so humbled and inspired by the other women there. We had women from a couple of different organisations in Northern Ireland: one from BT, from Datactics, another from IBM. And we also had the MD of TapSOS, Becca Hume, which was again fantastic.

We had women who had come from so many different backgrounds: some of them had come from an art background, business, and some followed a traditional route into software development... it was excellent to have those very honest conversations about the theme of the panel, which was that there is no one way into the industry and how tech is accessible to all. The feedback that we got from that session in particular was really fantastic.

To me, it was not only a session that I thought would encourage people, but I came away from it inspired, thinking how glad I am that this is my job and that I work in a sector like this.

What other positive feedback have you received from the teachers and pupils?

RS: The feedback that we got from the survey we did, and from some of the teachers, was that they really enjoyed learning about the likes of AI and using the micro:bits.

Some of the students said that they’d had literally no idea about the breadth of careers, about the stuff that's going on in Northern Ireland and this amazing industry here locally, so we definitely turned a few heads and made a few people think differently. Even if you get just one or two people to change their mind, it's a win for us.

The Head of Computing at Wallace High, Ruth Foster also said that her students were captivated; not even a whisper heard in the room as they listened intently. And, because it was virtual and we knew there could be issues with timetabling, we recorded every session and we've now made them all available to every single school in Northern Ireland as well. The teachers say that those recorded resources will be so well used by the schools going forward.

AM: Another piece of feedback that stuck with me, that a lot of teachers mentioned, was that the topics and content that we covered would really help them in years to come in teaching their digital technology offerings. A lot of schools in Northern Ireland are following a CCEA Digital Technology course at GCSE and A-Level, which can be incredibly challenging for teachers to teach. They're having to take on more and more and teach more and more complex content, so the topics we covered are going to be invaluable resources to them in years to come.

So, after such an amazing success, are there plans to run the event again?

RS: In our heads there are... I don't think we've actually even had a chance yet to sit down and go, right, do we want to do this again? How are we going to do this again? One of the questions we asked in the survey was ‘If we run it again, would you attend it?’ Everyone said yes!

For us, it's how we build on what we've done and how we make sure that we keep it fresh and interesting. It's certainly something that Civica is keen to do; our MD is completely 100% behind us as well. At the minute, it’s a case of ‘watch this space’! 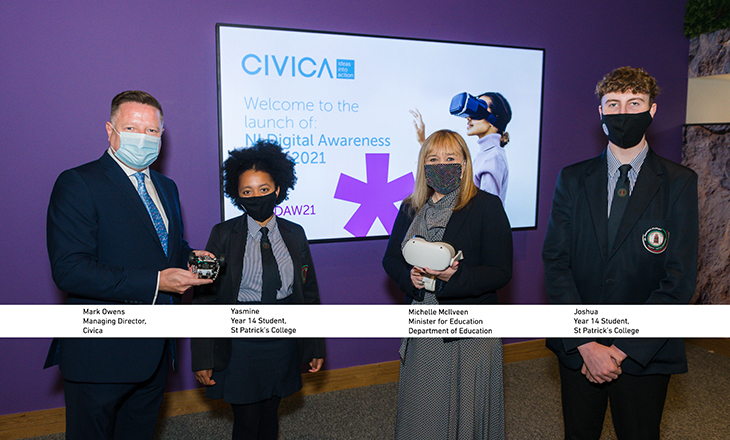 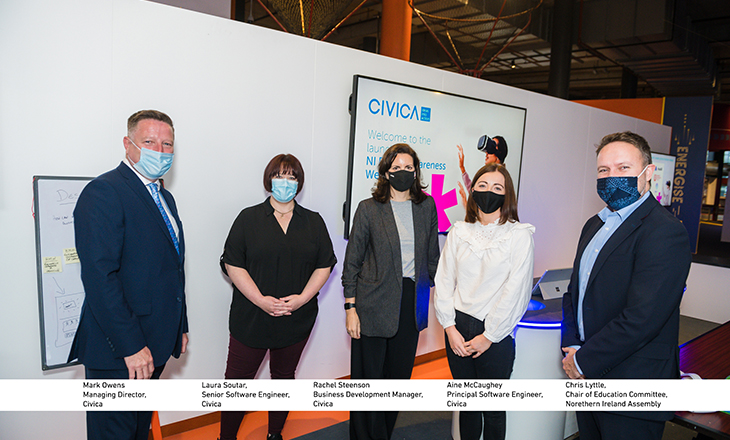 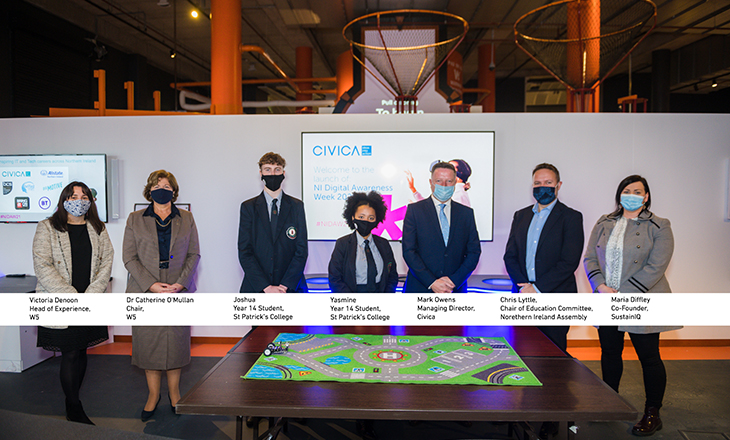 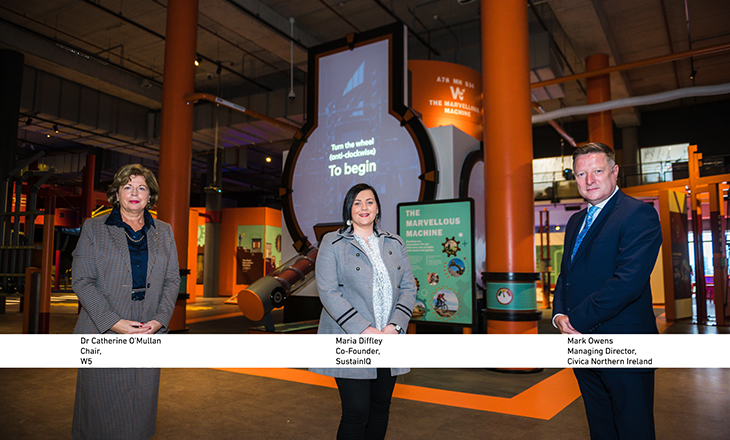