What’s next in the data centres’ sustainability journey? 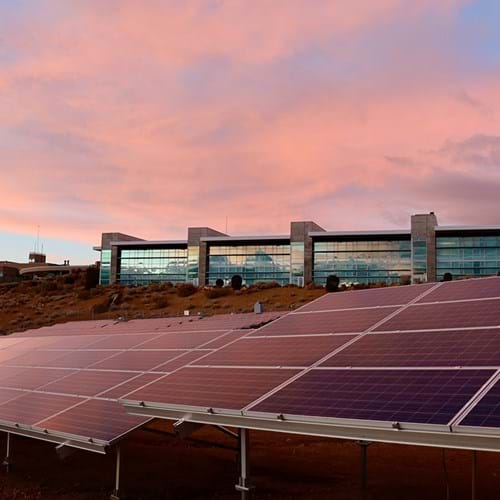 Microsoft has officially announced its intention of having a science-based reduction goal in Scope 3 emissions in the year ahead – and Google has extolled the virtues of hardware reuse and recycling, promising to get the most out of any equipment it uses.

Indeed, for many experts, 2022 is already shaping up to surpass everything that’s gone before and become the year of meeting environmental commitments. And the great news is that there has already much good work being done in the arena, not least by the forward looking data centre operators who have embraced renewable energy sources and striven to make major efficiencies in areas like power and cooling – as well as committing to green building practices for the long term.

Whilst all great ambitions, we must still be mindful of any organisations that claims to be carbon zero. To be truly carbon zero means looking at the entire ecosystem, which could include aspects such as logistics and employee travel to work and/or meetings. Somewhere along the chain there is likely to be some carbon emissions. Net zero is the goal, and we must look to offset any, and all carbon emissions.

That said, it’s good news so far for the industry which has always been known for its power hungry operations. But what’s next? What can data centre operators be doing today to get ahead of the game on mandatory climate change and environmental sustainability commitments and reduce their environmental impact? And how can they tackle the perception that data centres will never be truly sustainable?

The idea of a circular economy isn’t new. The model designed to minimise resource input, as well as waste and emission production, has been around for some time – and many organisations in the technology industry are heralding the approach as instrumental in their sustainability efforts. The ‘‘maintain, refurbish, renew and recycle” model ensures that the data centre industry can achieve maximum efficiency in the use of finite resources, support the gradual transition to renewable resources, and ensure the recovery of the materials and products at the end of their useful life.

From committing to get more life out of all materials in a data centre (maintaining equipment) to refurbishing hardware where possible, and then recycling parts that can’t be reused, there are plenty of benefits to be had and it’s likely we’ll see many more providers adopt the principles in the months ahead. But establishing a circular economy isn’t without its challenges - most pressingly that many data centre providers don’t own the IT equipment they host – and so must rely on their customers to take a lead in adopting the approach.

With this in mind, we’re likely to see two key areas of priority emerge; firstly, a sustained effort from data centre providers to educate and encourage partners and customers to embrace the model. The savviest providers will commit to working hand-in-hand with their customers in order to prioritise this approach to sustainability, as well as lobbying hardware providers to prioritise the longevity, reusability and ultimately the safe disposal of equipment.

Another trend we’re likely to see is a move away from solely focusing on IT hardware, and applying the same principles to the wider infrastructure of a facility – which is the area that data centre providers do, and can, control. For example, at VIRTUS we identified an opportunity to improve the section valves deployed in our Fire Suppression systems.

Our goal was to introduce enhanced functionality, which was challenging to do ‘in-situ’ – so we fabricated a small number of the new configuration valves off-site. We swapped out some valves on-site and returned the originals to the manufacturer for ‘part harvesting’. They dismantled the original valves off-site and reused most of the parts to create a more enhanced valve, which were returned to site and installed. The result was little waste, lower cost and speedier installation.

A holistic approach to sustainability

Data centre operators already know that to achieve true sustainability they must embrace a holistic approach, for example adhering to BREEAM regulations which look at the entire lifespan of a building, from concept and design to construction, operation and maintenance.

This circular economy is also a good example of a holistic approach in action – one which considers the impact of equipment at every stage of its lifecycle, from how it’s produced and used to how it’s ultimately disposed of at the end of its life.

We believe that the requirement to treat sustainability as a comprehensive, integrated initiative will only increase in importance in the year ahead. Indeed, we will see providers think beyond their own organisations – looking for greenhouse gas (GHG) emissions and cost reduction opportunities which lie outside their own operations.

Until now, we’ve seen companies successfully tackle their Scope 1 emissions (those from owned or controlled sources) and their Scope 2 emissions (indirect emissions from the generation of purchased electricity, steam, heating and cooling). However, a big focus in the year ahead will be tackling Scope 3 emissions, which include the indirect emissions that occur in a company’s value chain such as business travel, purchased goods and services, waste disposal and even employee commuting.

By measuring their Scope 3 emissions, data centre providers will be able to assess where the emission hotspots are in their supply chain, identify energy efficiency and cost reduction opportunities in their supply chain – and engage suppliers and assist them to implement sustainability initiatives.

And, of course, good communication will also be key to making this happen. The savviest providers will look to collaborate with their partners, customers and peers to minimise environmental impact and implement innovative solutions that will help reduce energy consumption and curb emissions, and complement customers’ own sustainability programmes.

As well as these new initiatives, it’s important to remember that there is already plenty of good work being done in the data centre industry to meet its sustainability obligations – and which we will see grow and evolve over the year ahead.

The ability of data centre providers to harness renewable energy sources has been game-changing in the industry’s pursuit of a greener future. Many providers, such as VIRTUS, now use 100% renewable energy, from sources like hydro, wind and solar. And the great news is that renewable energy is now not only more affordable than fossil fuels, but can also be more reliable.

Data centre providers have also been looking closely at the fuel sources they use – and significant progress is being made on this front too. The use of hydrotreated vegetable oil instead of diesel in our generators has the potential to reduce carbon emissions by up to 90% - while eliminating sulphur dioxide emissions and reducing harmful nitrogen oxides.

And there’s plenty of forward looking innovation happening too which promises to pay dividends in the long term. Technological developments in areas such as fuel cells are continuing at a pace – and while they’re not viable right now, if they can perform at scale, they might present a compelling option for future green data centre power.

So the future looks bright for the data centre industry – with many providers working hard to look at all the things which they can do to meet their most pressing sustainability goals, from design and construction, to getting the most out of equipment and managing partners in the supply chain.

We know that reducing a facility’s carbon footprint requires more than making tweaks at an existing site, and the great news is that many providers now realise that being green starts even before they get to the construction phase – putting time and effort into designing sustainable facilities and using low- carbon materials, which are fit for the future.

But, no company is an island, and the industry must work together to solve its green challenges. From sharing best practice to setting up multi party task forces, there is plenty of scope for more collaboration. Indeed, it’s only by working together that we will make the necessary steps to truly green this power-hungry industry.

In this same vein, we will also see data centre providers capitalise on funding available for green initiatives. As well as discreet research projects, there is more than £5 billion of funding available to help UK businesses become greener as part of the government’s commitment to reach net zero emissions by 2050.

We know that funding opportunities will be awarded to businesses investing in green technologies to increase energy efficiency or reduce carbon emissions – and so it’s likely that the savviest providers will continue to take advantage of these schemes, not only addressing their own green ambitions but driving broader innovation too.

Other articles by David Watkins