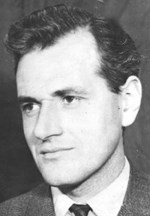 No-one in his family had ever been to university, but John showed early the ability to think things out for himself, and when, at the age of about eight, he read in the Boys’ Own magazine about some choirboys who kept bees, he decided that he would like to be one of them. As it happened he was naturally musical with a beautiful treble voice and, after some very basic music lessons from the local church organist, the curate arranged for him to have a voice trial at Christ Church Cathedral in Oxford. He was offered a place in the choir and at the choir school, but when his parents realised that there were school fees to pay they decided against it. Fortunately this was followed by a voice trial at St Paul’s Cathedral in London where the places at the school were free, and so in 1939 he became a Chorister at St Paul’s Cathedral.

London in 1940 was experiencing the Blitz, and he was evacuated with the rest of the choir to Truro, to sing in the cathedral there. He always commented that his Identity Number and subsequently his NHS number ended /36 as he was first listed as the youngest probationer in the choir, a household of 36!

In 1945 he moved to Brentwood School in Essex, and in 1949 he gained a place to read medicine at King’s College, London, completing his clinical training at the Westminster Hospital, while moonlighting as an occasional tenor in the Abbey choir. After completing his ‘house jobs’, he did his National Service in the RAF from 1954, serving as a medical officer at bases in Ceylon, Malaya and Hong Kong.

After this, from 1956 he worked at Addenbrookes Hospital in Cambridge, first as a junior doctor and then training as a radiotherapist. initially at the Christie Hospital in Manchester. and then returning to Cambridge. After completing this training, he decided on a more academic career, and in 1962 he gained a place at Stanford University in California, where he worked in a cytogenetics laboratory, but he also saw at first hand the early days of Silicon Valley and realised the vast potential for computers in medicine.

In 1965 he returned to Cambridge University as the Elmore Student, funded for postgraduate study and research, and attached in his case to both the Department of the Regius Professor of Physics and the Mathematical Laboratory, which had already installed an early mainframe computer, Titan 1. He gained a qualification in computing from the Mathematical Laboratory and worked on an automated project that could measure and identify human chromosomes. He also worked with colleagues using Titan to plan radiotherapy treatments, something that had previously required laborious calculations.

Incidentally he did also fulfil his childhood ambition to keep bees, and from 1965 to 1970 he sold his ‘Pure Cambridge Honey’ from a specialist food shop near the Round Church in Trinity Street.

In 1970 he moved to work at Oxford after being recruited by the Regius Professor there to work in association with the Oxford Record Linkage Project to look into the practicalities of automated collection of clinical data from general practices for use in epidemiological research. With this brief he started the Oxford Community Health Project. To work with him on this project, he recruited a dozen group practices based in Oxfordshire and in Buckinghamshire, in what was to become the new city of Milton Keynes.

In order to discover others with similar interests, in 1972 he organised the first Oxford Conference on Primary Health Care Computing. This was probably also a world first, and to his surprise nearly 200 people registered, most of whom had never met or heard about each other before; from the registrants he was able to recruit speakers who had worked on projects in related fields, not merely those who had bright ideas!

His work with GPs made him aware of the shortcomings of the International Classification of Diseases (ICD) codes and even of those coding systems designed specifically for general practice. So he worked on this problem, creating an extended ICD system with numbers to include the main symptoms and clinical presentations in addition to the final diagnosis. The result of this work was published in 1975 as the first edition of the OXMIS Codes. Further editions followed in his lifetime and several of his original ideas were adopted as features of the Read codes published after his death.

From 1977 he developed progressive disability, which affected his balance, co-ordination and autonomic function. However, he continued to work from an electric wheelchair, and with a remote computer terminal at home, a teletype linked by modem and telephone to the University mainframe computer. He continued to develop both the OXMIS codes and the GP system, with programs to help GPs manage their practices as well as the collection of clinical data for research, which was the original objective. Few GPs at that time had access to computers, and this work done with the collaborating practices pioneered much that was later transferred to commercial systems with widespread implementation.

In 1985 he donated the profits from OXMIS to the Primary Health Care Specialist Group of the British Computer Society in order to create the Primary Health Care Computing Prize. The first prize was presented by him at a meeting of the Group at Sussex University in March 1985, only weeks before he died. After his death, the Group decided that it was appropriate to name this prize the John Perry Prize in his memory.

The John Perry Prize has been awarded most years since 1985, to many others who have pioneered the implementation of novel computing systems in general practice, and with whom John would be proud to have been associated.