The size and shape of the secondary and primary sector[11]

There are around 620k students in each secondary year band in England.[1]

It is anticipated that primary school numbers will drop across the period to 2030, whilst secondary numbers will peak in around 2025 before the primary decline begins to have an impact. 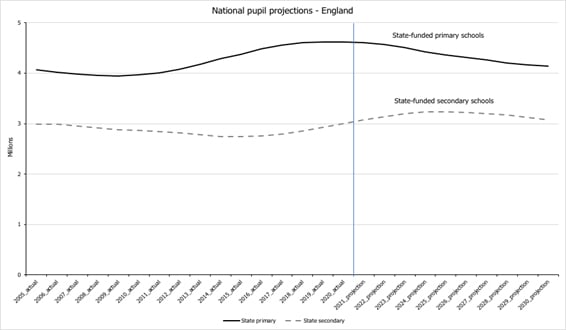 This section attempts to capture in as summative a form as possible, the key characteristics of the main examinations currently available in England, including the curriculum focus, assessment methodology and coding languages preferred.

Computer Science and IT - AS level, Level 3 (AQA)

Computer Science and IT - A level, Level 3 (AQA) 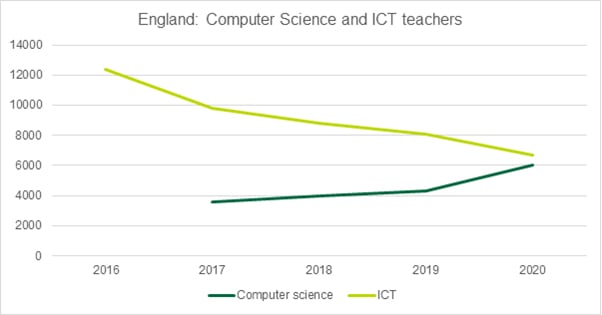 There is typically at least one designated Computer Science teacher per secondary school in England, however the available data suggests that not all schools offer the qualification so there may be a higher proportion of these specialists in schools that do offer the qualification, as outlined by Kemp and Berry[14]. This shift in teacher designation is unsurprising given the change in the GCSE.

The recruitment of computing teachers to initial teacher training/education remains a challenge, with under 75% of the target figure being met in the past five years (EE). 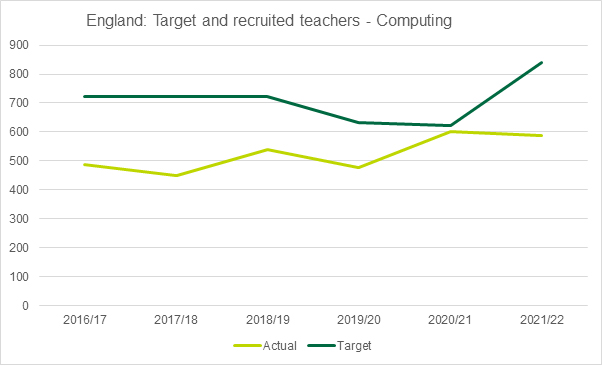 The 2021/22 Teacher Supply Model target for postgraduate initial teacher training in computing in England is 840, a notable upwards shift from the 2020/21 target of 621. This target appears to have been missed, as in each of the previous recruitment cycles. Even with 70% recruitment figure (representing 589 trainees) this is still below the previous year’s target.

The best recruitment year (2020/21) saw 97% of the target being met, but the numbers in this cycle may have been affected by the poor economic outlook and this may have been a single-year phenomenon[16]. Amongst STEM subjects, only biology recruited at a better rate, with chemistry, mathematics, and physics still some way short of the target, even though there are no recruitment limits on teacher training or education providers currently.

Recruitment to teacher training is modestly associated with both downturns in an economic cycle and precarious labour markets (ibid). Other authors[17] have been tracking the recruitment data since the 2021 cycle began and have also noted the relative upturn in interest in teaching as a career option. Training to teach Computer Science computing appears to have benefitted from this increased labour market uncertainty. However, the signals this sends about the prospects for a stable career as, say, a computer scientist may suffer as a result, influencing young people’s views of the attractiveness of the subject.

The upturn may also reflect a ‘slow-burn’ success of the introduction of incentives such as training bursaries of £24,000 and scholarships of an additional £2,000 which also attract expert support from BCS[18]. Bursary support can be a useful way of boosting recruitment, however previous efforts in other priority subjects have sometimes resulted in ‘bursary tourism’ (where trainees take up a bursary, train, and do not teach, or are recruited to the independent sector)[19]. In a further step, highlighting the ongoing challenge involved in securing sufficient new entrants, recruitment to teacher training/education has also been encouraged by offering to repay student loans[20].

Potential trainees can supplement their knowledge by undertaking one of the 27 subject knowledge enhancement courses available across England, prior to starting their initial teacher training/education (ITT/E) programme[21].

To complement the work carried out by the Computing as School (CAS) network[2] there has been a significant increase in the professional development available for computing teachers in English secondary schools, and for those who wish to develop the specialism as an additional subject.

The launch of the National Centre for Computing Education (NCCE) in 2018 which includes the Teach Computing[3] programme (including bursaries for teachers to support training) offers a way to make up the shortfall in computing teaching skills at every key stage in England. NCCE recently announced that it has supported over 30,000 teachers including over 5,800 secondary specialists to support GCSE Computer Science teaching[4]. The NCCE is currently on track to meet its targeted number of these specialists.

Teacher subject specialism courses were introduced in England in 2016[22], aimed at non-specialists and returning teachers in secondary mathematics, core maths, physics, and modern foreign languages (MFL). They do not currently include Computing.

The withdrawal of the GCSE in ICT resulted, inevitably, in its decline in the attainment data. There were no entries in 2017/18 and a very small number of entries for AS level and A level in 2018/19. The following charts set out the patterns of participation over the past five years. For the sake of comparison, data for England, Northern Ireland, and Wales is drawn from the Joint Council for Qualifications (JCQ) annual statistical bulletins. 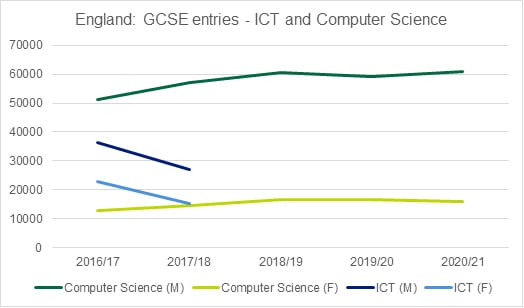 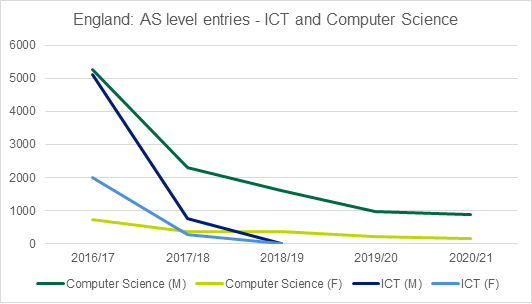 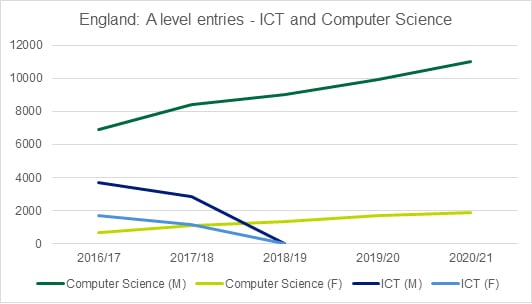 When comparing the attainment of female and male candidates across GCSE, AS and A levels over the past five years (as in the following charts), at the highest grades, female candidates appear to regularly outperform male candidates. However, there appears to be a plateau in entries at GCSE, and a much slower rate of growth in uptake at A level by female candidates compared with males. 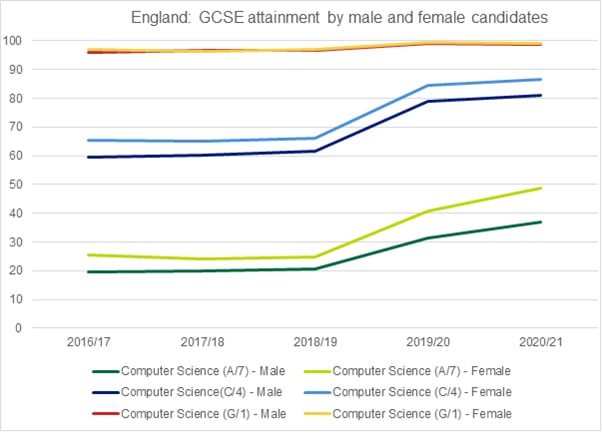 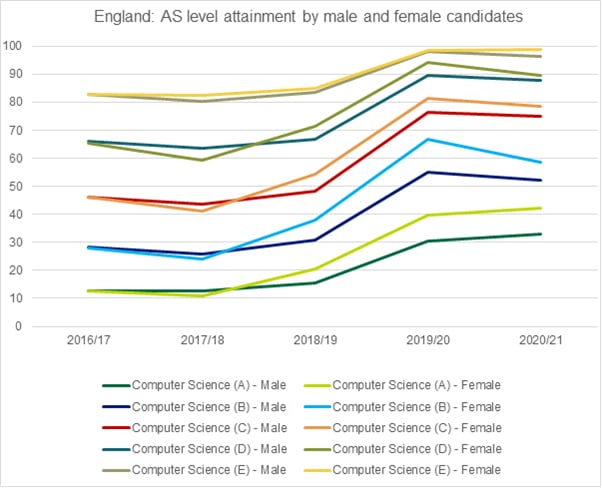 Studying Computer Science has rapidly increased at KS4 and KS5, but this growth appears to be slowing and about 78% of schools in England offer the GCSE. 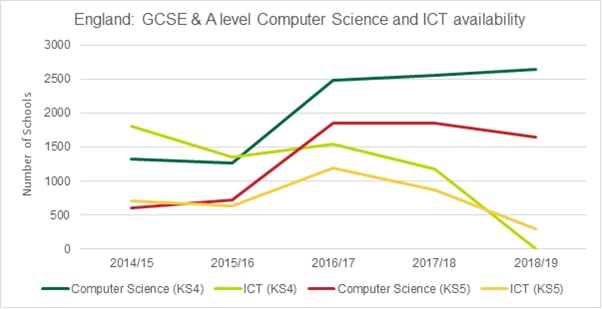 The new computing curriculum has been taken up rapidly and more schools now offer GCSE and A level Computer Science than offered GCSE and A level ICT. The position of AS levels in England has changed from being part of a progression to A level to being a stand-alone examination, with a concomitant decline in school and student interest. The inclusion of GCSE Computer Science in the English Baccalaureate (EBacc) measure of school performance may have generated initial interest in the qualification.

In 2020, Computer Science was ranked as:

These patterns conceal some stark disparities in uptake by gender, patterns that were already evident in the previous GCSE participation rates, but which are now more dramatic. Whilst previously the male:female student ratio in ICT participation at GCSE, AS level and A level, ran at 2-3:1, for Computer Science this has remained at 4:1 for GCSE and it has been as high as 10:1 for A level (6:1 in 2019/20).

There is no public and accessible published data regarding uptake by ethnicity, although Kemp, Berry, and Wong[23] used the National Pupil Database (NPD) to examine this and found that the diversity of entrants to Computer Science (compared with ICT) was markedly different and not as representative as would be desired[5]. The same authors have recently reiterated their concerns about the unrepresentative nature of entries for the Computer Science GCSE in England, with particular concerns over female student participation[24].

Some of the uptake challenges appear to be rooted in perception issues, both for students and parents/carers. The Department for Education (DfE) regularly surveys the subject choice views of students and their parents / carers[25].

The involvement of parents and carers in supporting choices was also highlighted in a recent report examining how interventions aimed at altering behaviour relating to subject choices influenced A-level selection[26]. The interventions were targeted at improving the participation of high-attaining female students in STEM subjects (including Computer Science) prior to finally selecting their A levels. Whilst there was little evidence of an impact at individual subject level, students in the intervention group whose parents or carers were ‘nudged’ were more likely to select a second STEM subject.

There is currently no published data illustrating uptake by students by socioeconomic status, ethnicity or other relevant demographic. This can only be accessed via the NPD.