VTQs are regulated and awarded by the SQA and can be delivered in schools or colleges. There are 39 awards that have been identified as being relevant to this analysis, covering IT/ICT, computing, and digital skills.

All of the data presented here is in the public domain and has been accessed here:

The currently active awards are set out in Annex 6 and the definitions of what the discrete types of award are as follows:

National certificates are directed at 16-18 year olds and aim to help prepare individuals for the world of work, or to support career development. They can also act as stepping stones towards further study.

National progression awards can be delivered by partnerships of schools, colleges and employers. They identify a discrete set of sector-specific skills (drawing on the National Occupational Standards that underpin Scottish and National Vocational Qualifications - S/NVQs).

Higher national units are the building blocks of Higher National Certificates and Diplomas (HNC/HND), awards that are employer-focused and can be taken at college or university.

The data, showing awards (which offers the most detailed data perspective) made to students, over a five-year period, is set out in the charts below. 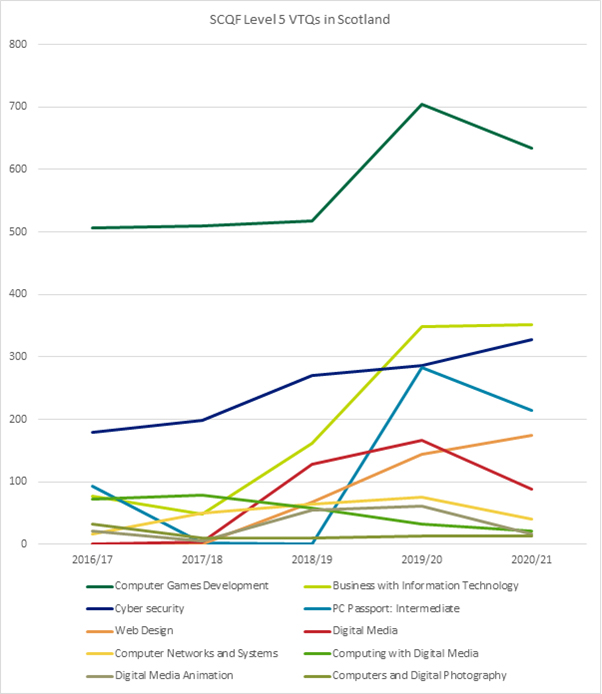 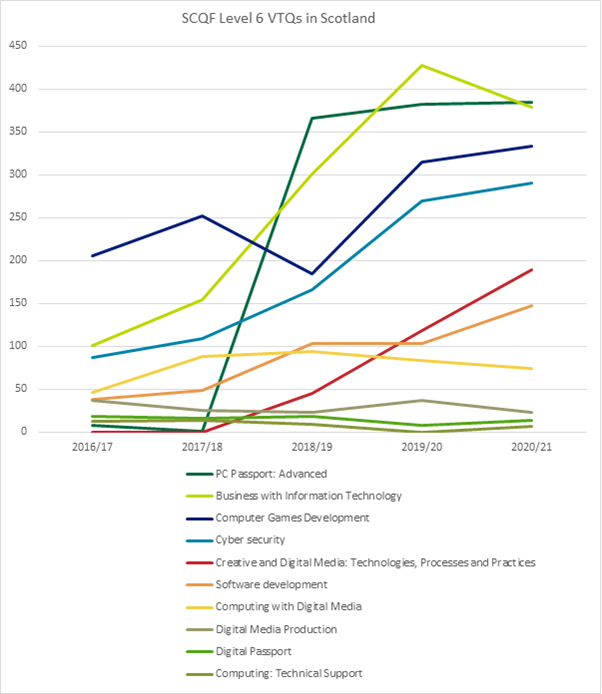 In 2021, the three most popular SCQF Level 5 and Level 6 awards (by attainment) were as follows:

The data for awards in SCQF Level 6 ‘IT in Business: Word Processing, Spreadsheets and Databases: An Introduction’ is not available for 2020 or 2021 at present. It has been in decline since 2015/16, but still saw 610 students gain the award in 2018/19 (easily placing it in the top three awards).

For the sake of comparison of scale, in 2021, the equivalent National 5 and Higher entries were 6,286 and 3,377 respectively in Scotland.

The ratio of male to female candidates follows some familiar patterns. For the most part male candidates predominate in these vocational awards, with some very strikingly high ratios of males:females (see SCQF 5, National Certificate, Computer Games Development for example). There are, out of the 39 awards, a small number (seven) awards where the pattern is reversed:

It may be worth considering what characteristics of these awards (possibly, the potential for them to offer opportunities that are not tied to careers in computing) are that make them more attractive to female students than other digital skills options.

One additional observation concerns the pattern of awards made versus entries. If we look at the three most popular National Progression Award subjects by entry at SCQF level 5 in 2020 (Computer Games Development, Cyber Security, and PC Passport), the overall entries amount to 2,344.

However, the awards (which are based on a pass / fail basis) range from 42% for males taking Cyber Security to 66% for females taking the PC Passport award. The success rate for females in these subjects, even though the male to female ratio can be as high as 9:1 for Cyber Security, is higher than for their male peers.

The Scottish Curriculum for Excellence (CfE) was introduced in 2010 after a long period of national consultation and its effectiveness was reviewed by the OECD in 2015[53] and a second appraisal by the OECD has recently been published[54].

The CfE sets out to offer a broad, general, education and does so via a thematic curriculum, in which digital skills and Computing Science are located, with the latter being a specialist choice at age 14 and above. A recent review of how young people experience technologies within the broad, general education has noted that the use of the concept that ICT was present in the curriculum ‘to enhance learning’ had outlived its usefulness. Education Scotland will now describe their approach as placing ‘digital technologies at the heart of learning’[55] with an emphasis on the development of computational thinking.

There has been a decline in the number of teachers qualified to teach the more specialised qualifications, similarly a drop in the number of students taking such qualifications. Some argue that curriculum choices at National 5 and above are narrowing as a result of structural changes to the way in which the curriculum is mandated to operate[56], also pointing out that this may be to the detriment of young people in schools serving disadvantaged communities. Some have observed that this is a particular issue for the delivery of Computing Science[57] as well as for STEM subjects more broadly[58].

Responding to the needs of industry and to create qualifications that develop relevant skills, the SQA introduced Cyber security and Data Science National Progression Awards (NPA) in 2015 and 2019 respectively at Scottish Credit and Qualifications Framework (SCQF) levels 4, 5, and 6.9

Typically NPAs focus on skills for employment and would generally feature in the curriculum offered by the further education sector, but in this case the SQA have been keen to promote it to schools too, to be studied alongside other National 5, Higher and Advanced Higher qualifications to complement the Computing Science curriculum. In 2020, the first year of assessment, 8 students took this (Data Science) award at SCQF level 5 (equivalent to National 5).

There is a clear development of a digital skills agenda in schools and colleges in Scotland, flowing from the 2011 and 2017 Digital Strategies[59.60] and the 2016 ‘Enhancing learning and teaching through the use of digital technology’ report[61]. However, the recent Scottish technology ecosystem review[3] was highly critical of the progress made, the framing of Computer Science in the curriculum and the stark under-representation of young women taking up the subject.

Nevertheless, looking across the entire range of computing and digital qualifications and awards, it is possible to see the number of entries at least stabilising, although there is still a challenge in the way that the newer awards are viewed compared with Computer Science, in particular the parity of esteem between vocational awards and graded national courses. This is linked to the ways schools measure and compare their attainment (insight points) and the perceived value of courses with no exam.

It is likely that the ramifications of the recent OECD review of the CfE[54] will continue to influence the shape of the curriculum, its reach across subjects to all pupils and students, and the way learning outcomes are assessed for some time to come. This may provide an opportunity to revisit Computing Science and digital skills in Scotland and address some of the concerns set out by the Scottish technology ecosystem review[3].