In Wales, according to the Qualifications in Wales database (69), there are currently 70 regulated awards available in subject related to ICT at Levels 2 and 3 (21 Level 2 and 49 Level 3). These awards are overseen by eight awarding organisations:

The currently active awards are set out in Annex 7.

All of the data presented here is in the public domain and can be accessed here:

The data set may include awards taken in the further education system by adult learners.

Whilst it is possible to identify many different qualifications, reporting is an aggregate level - ICT for practitioners and ICT for users.

The following charts show the VTQ awards made across five years in Level 2 and 3 qualifications, separately by males and females. 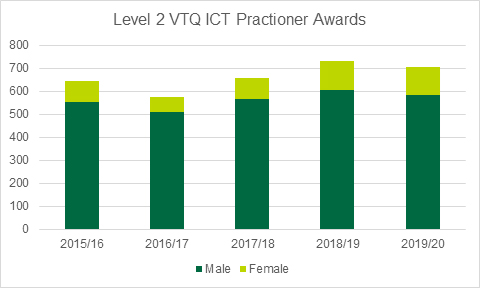 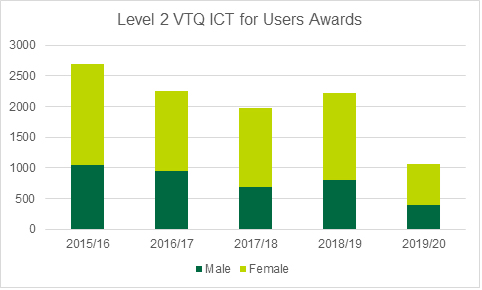 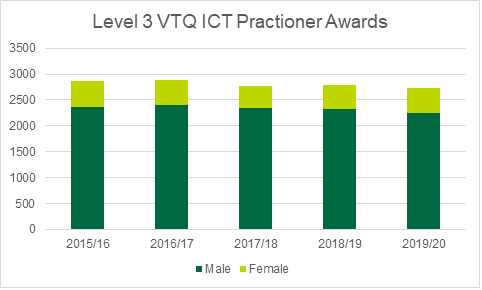 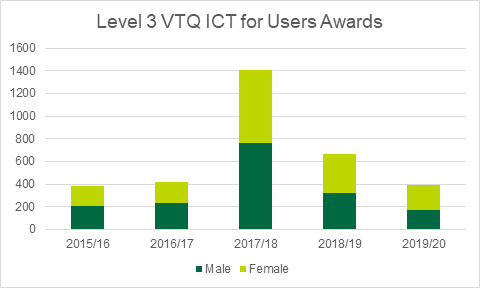 The ratio of male to female students has been closing at Level 2 across five years - from 6.2 down to 4.9. The ICT for users Level 2 course has always had more female students that males - 1:0.6.

The computing curriculum has evolved over at least a decade in Wales, with a far-reaching and influential review of ICT in 2013[70] which set the ball rolling for an overhaul of the curriculum.

A principal recommendation was the separation of ICT into Computing (with Computer Science and Information Technology covered) and attention given to creating a digital literacy framework which would be woven into education from the Foundation phase and sit alongside numeracy and literacy as statutory cross-curricular skills. The 2015 independent Successful Futures review of curriculum and assessment in Wales[71] took up and endorsed these messages.

A bilingual Digital Competence Framework (to be the responsibility of all teachers, as the 2015 review advised) and covering up to and including Year 11 was developed and made available to schools in 2016[72]. Alongside this, there has been a detailed review (by Qualifications Wales) of the qualifications and assessments that are currently available to young people[73].

This has, as per the Scottish technology ecosystem review[3], noted the limitations of an existing curriculum that is often delivered by non-specialists and set a clear direction towards a suite of qualifications that are current, relevant to the future, and assessed in ways that are credible, relevant, and challenging yet engaging. Qualifications Wales approved new GCSE and AS/A level qualifications in Digital Technology (launched in 2021 and 2022 respectively).

The WJEC awarding body will concurrently review the existing GCSE and AS/A level awards. There is a separate but linked digital strategy for non-school post-16 provision[74].