The size and shape of the secondary and primary sector[11]

There are around 50,000 students in each secondary school year band in Scotland.

The most recent student projections from the Scottish Government date from 2016 and indicate that primary numbers are stable and dropping from 2020, with a related slow rise in secondary numbers. 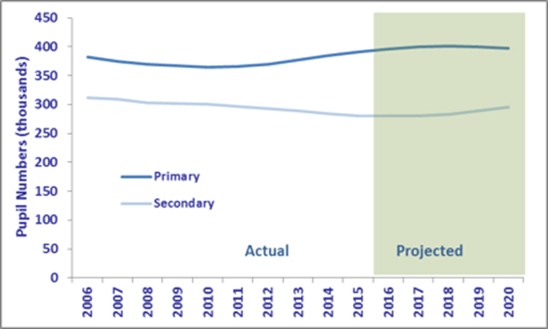 The current curriculum and assessment

This section attempts to capture in as summative a form as possible, the key characteristics of the main examinations currently available in Scotland, including the curriculum focus, assessment methodology and coding languages preferred.

There are currently at least 595 teachers in Scottish secondary schools delivering Computing Science, little changed from the number in 2016 (594). Interestingly, in 2008, there were 766 Computing Studies teachers[46] indicating a 22% decline in teaching capacity in just over a decade, across a period when student numbers were relatively stable. 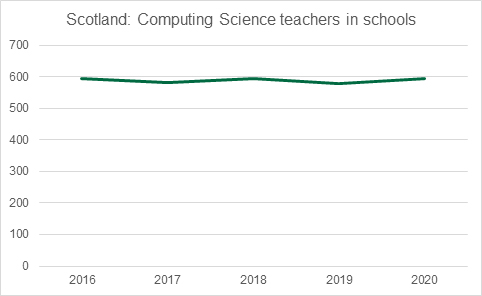 Recruitment to initial teacher education/training for Computing Science (as with many STEM subjects) remains a challenge in Scotland and is concentrated in four of the 11 initial teacher education / training providers. Over two thirds of the places are in two providers in Glasgow, which although the central belt is home to approximately 70% of the Scottish population, this regional consolidation may limit supply for the rest of the country.

To address the need for teachers, there are now bursaries in place to encourage recruitment[8], in 2021/22 the aim is to recruit 47 new entrants to the profession. This is still a difficult target to meet; at best, recruitment has only managed to get to a maximum 94% of the target in one year in the past five (from a low point of 68%) with the increased proximity to the target figure largely a result of it being steadily reduced. 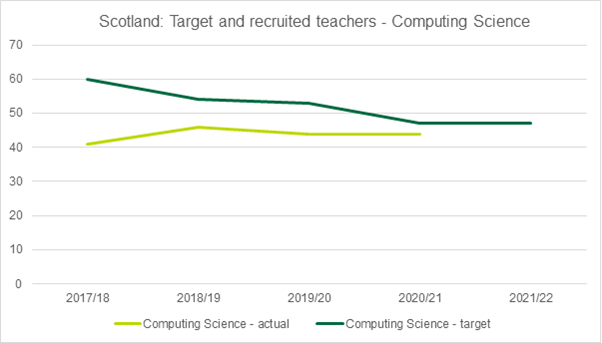 BCS, with funding from Microsoft, has supported The University of the Highlands and Islands (UHI) to develop an additional teaching qualification award in Computing Studies leading to BCS certification to support teachers wishing to add this subject to their portfolio[51].

A 2014 initiative to create a teacher professional learning network for Computer Science teachers (Professional Learning and Networking in Computing - PLAN C) produced promising outcomes such as engaging over 300 teachers, gaining positive feedback on their proposed pathways to change model and identifying lessons for future professional development[52].

The pattern of participation in Scotland shows a drop of over 20% participation at National 5 across five years (likely contributing factors may include staffing in schools, changes in course and assessment and the narrowing of subject choices in some schools), although the most recent data shows an upturn at all levels.

The SQA has also been offering a wider and more diverse range of employment-focused digital skills awards (such as National Progression Awards - NPA) which are beginning to be taken up in schools (in 2021, 634 students took an NPA in Computer Games development at Scottish Credit and Qualifications Framework (SCQF) level 5). 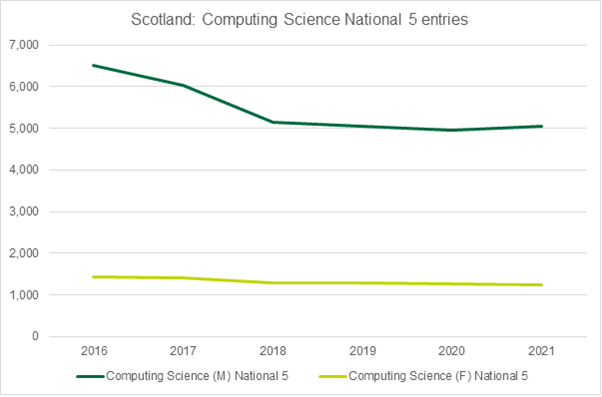 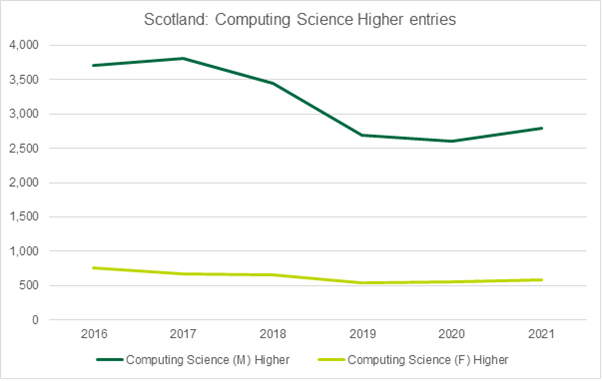 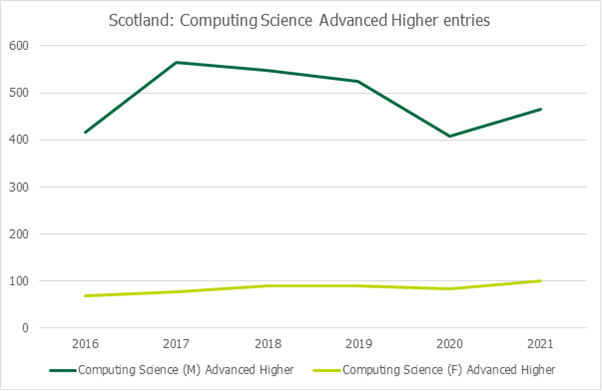 The following charts set out Computing Science attainment by male and female candidates over the past five years (cumulative percentages). 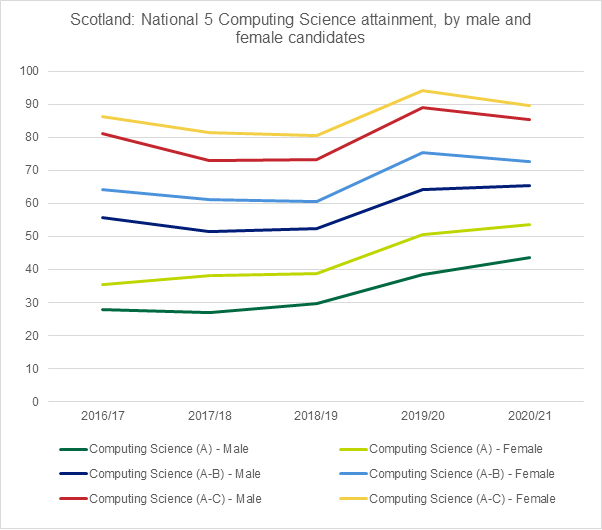 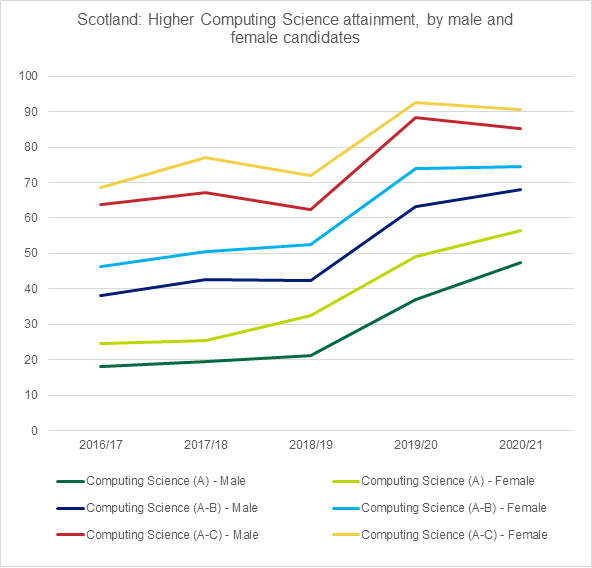 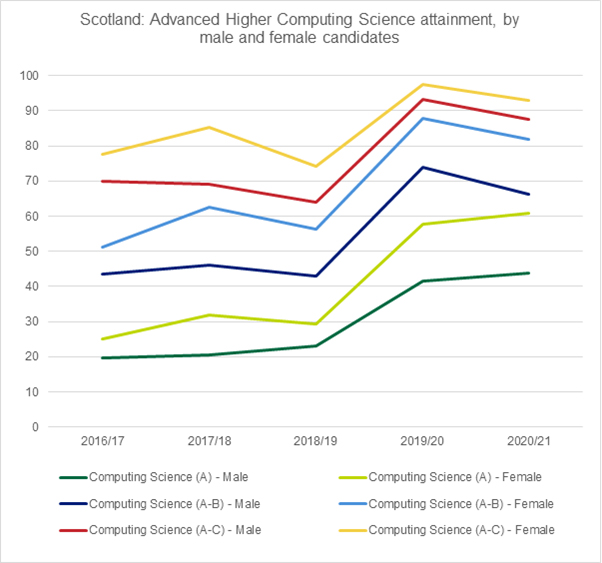 The participation patterns reflect those in other parts of the UK, with at most (National 5) 20% of entrants being female and at worst 12% (Advanced Higher). Total numbers of female participants in Computing Science qualifications have broadly held up, but they are notably out of step with male participation.

In Scotland, the 2020 data (latest year for which there are detailed cohort sizes) indicates that National 5 participation was 12% of the cohort, with 7% and 2% respectively taking the Higher and Advanced Higher options. These data have been consistent over five years, so it is unlikely that it will have been very different in 2021.

There is currently no published data illustrating uptake by young people from different socioeconomic backgrounds, or by ethnicity.