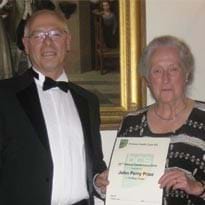 GP Dr Brian Fisher has been awarded the John Perry prize for his years of work promoting the benefits of patient records access. Dr Fisher has been giving patients access to their records at his practice since 1984 and is clinical lead of Patient access to Electronic Records Systems - a company set up to provide touch screen kiosks in GP surgeries to enhance services for patients. The prize was set up by John Perry with profits from his OXMIS GP coding system to recognise outstanding contributions to primary care computing.

Entries are assessed by a panel of judges from the BCS Primary Health Care Specialist Group, which presented the award at its annual general meeting at the end of last month. Dr Fisher told eHealth Insider it is a “real honour” to win the John Perry prize. “It also gives a platform for record access and for me to be able to keep pushing the message,” he added.

In his John Perry Prize presentation, Dr Fisher talked about the project being led by the Royal College of GPs to make online records access possible for all patients by 2015. He said there are seven working groups made up of around 100 people who are looking at various aspects of the programme, which he described as a “huge task.” Dr Fisher argued that what is holding back the roll-out of this functionality is not the technology, but a “set of very powerful emotions” affecting clinicians. “It’s already clear to me that the profession is so worried about this that they want to do the minimum possible to meet the record access required,” he explained. “My worry is that this becomes an entirely risk based approach; rather than saying this is something that benefits everybody, it’s a social justice issue and there’s no question that the NHS shouldn’t be doing this.

“I don’t detect that as a direction of travel for this process and I’m quite concerned about that.” He said some people view power is like a see saw, whereby if one side gains some power the other loses it. However, he argued that it is more like lighting candles, which creates more light for everybody.

Roz Foad, chair of the PHCSG, said there were some strong entrants for the John Perry prize this year. “Patient access is very topical at the moment and Brian is fantastic. Like him I’m worried it may be swallowed up by some enormous organisation and I wanted the group to make a demonstration of how important this actually is,” she added.